Press Release for The Seahorse Trainer

From directors Babak Bina and Ricardo Bonisoli at Rooxter Films, an award winning short film called “The Seahorse Trainer” is being released. It was recently shown at international film festivals and has garnered awards around the world. 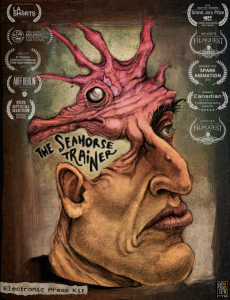 The film has won the prestigious Grand Jury Award at the Seattle International FIlm Festival, and therefore is qualified for the Academy Awards 2020. Next week will be our Canadian premiere at the Spark Animation Conference in Vancouver and we are presenting our film as the award winner in the “Best VFX” category and will be the recipients of the “Rising star in Visual Effects” accolade, awarded by the Visual Effects Society (VES) Vancouver section. Download the full electronic Press Kit HERE.