You're going to love the new TheCGBros Insider Podcast! 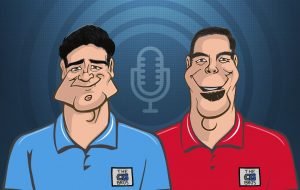 Using an Animated Avatar of Himself, Digital Media Professional, Bill Johnston, Co-founder of the Popular TheCGBros YouTube Channel, Earns Praise for His Performance in a Video Podcast Preview Provided to a Special Panel of Members of the Voice Acting Academy.

SAN DIEGO, CA — January 6, 2021 — TheCGBros, a Third-party aggregation YouTube Channel becoming an integral part of many short films’ release strategies, conducted a highly successful beta test of the first episode of their now-in-production podcast series, TheCGBros CGInsider Podcast. Bill Johnston, co-founder of TheCGBros YouTube Channel with his brother, Shaun Johnston, delivered the program content solo, in “talking head” format, but future episodes will see participation from Shaun and from influential guests, as well. Of special interest is that, although Bill spoke as himself, he did it through the novel medium of an animated avatar, possibly a first in the industry. The avatar was designed and executed by co-founder, Shaun Johnston.

The podcast program content is intended for consumption by people with a wide variety of tastes and interests, especially fans of short videos. The subject matter will also be of general interest to students of CGI as well as both entry-level and professionals in the field. The series will be rolled out on other streaming platforms weekly on Tuesdays.

The test episode, which runs approximately 20 minutes long, is entitled “What is CGI?” Podcast titles scheduled for the remainder of January include:

The venue used for the test was an online weekly meeting of the Voice Acting Academy’s “Conductors Club” (VAACC.) The VAACC is a membership support service open to voiceover talent at all levels of experience for the purpose of helping them to advance their voiceover career and to help them get more work. The test involved a three-member panel of long-time members of the VAACC. Participating in the test were James Alburger, Tom Daniels, and George Asteri. Senior member of the panel, James Alburger, of San Diego, author of the book commonly used as a required text in college-level voiceover classes, “The Art of Voice Acting,” now in its 6th edition, asserted, “That’s really nice. Very interesting, very thorough, very effective.” Alburger is an 11-Time Emmy® Winner for Sound Design, and owner of The Voice Acting Academy and CIGMA Media. He is also an Engineer, Voice Acting Coach, and Executive Producer/Director for Film, Video, and other media. Alburger operates the websites VoiceActing.com and at cigmamedia.com. Panelist Tom Daniels averred, “That was awesome. Very informative and entertaining. It held my attention all the way through. What surprised me most was that the first use of computer generated imagery dates all the way back to 1958 in the Alfred Hitchcock film, Vertigo.” Daniels is an Emmy®-winning Voice Actor/Executive Producer who lives in Massillon, Ohio. You can listen to Tom’s sound demos here TomDanielsVoiceDemos and reach him at tomdanielsvoice@gmail.com. The third member of the panel, George Asteri, opined, “That was an excellent summary and gave a really good understanding of CGI. It really informed me.” Asteri, who lives in Saginaw, Michigan, has been acting for his entire life. As a Shakespearean trained actor, Asteri has performed on stage with such notable stars as Christopher Walken in Richard II, and Nicholas Pennell in Richard III. He has also played leading roles in many stage plays, including Shakespeare’s Hamlet. As a voice actor, Asteri has voiced national, local and cable commercials, shared his narration talent with a large Michigan school district film production, narrated for audiobooks, and has made several recordings for Internet clients. Asteri operates a website at https://www.GeorgeAsteri.com where he has provided his email address and telephone number.

Don’t miss any of the upcoming podcasts. The January schedule is above; here’s the February Schedule:

May 2022 – How is Lip Synching Animation Created?